Compared to recordings from the period prior to the rise of the soloist, tracks from modern operatic singers can be much longer. For the CD “My Latin Heart”, comparing José Carbó’s recordings of Mi Buenos Aires Querido with that of Carlos Gardel shows that Gardel’s recording is 2 minutes 38 seconds, whereas Carbó takes 3 minutes 17 seconds. Now this difference in length could be put down to arrangement of accompaniments and indeed there is a 6 second intro to Carbó’s version, but—comparing like with like—the first part of the song takes Gardel 24 seconds to sing, whereas Carbó takes 40 seconds – nearly twice as long.

Comparing versions of another Cancion Porteña, Caminito, this time the times are much closer at 2:30 and 2:20 for Carbó and Gardel respectively, but it is again Carbó that is longer, if not by much.

And compared to versions from orquestas presenting tango music for dancing, the discrepancy is equally real. Comparing the first stanza and chorus of Uno from Carbó with Biagi’s version of 1944 with Acuna singing—and trying not to get distracted by Biagi’s very busy arrangement—Carbó takes 1 minute and 51 seconds to sing what Acuna sings in 1 minute 32 seconds, that is Carbó takes over 20% longer. Maure singing in D’Arienzo’s 1943 recording is even snappier, and Carbó takes more than 25% longer. Even Roldán singing Canaro’s version from the same year takes only 1 minute and 36 seconds which means that Carbó takes nearly 16% longer.

The cross section of comparison tracks for the 1947 version of El Choclo is different: rather than comparing to two versions from the same year for El Choclo I have selected versions spanning 1948 to 1957, and again, the same pattern is repeated. D’Amario singing with Vargas in 1957 selected only a short subset of words (Por tu milagro…de querer…/Al evocarte…de un bandoneón) so I matched the other selections to this. Arenas singing with Canaro in 1948 is predictably the quickest, getting through it in 37 seconds. Beron with Troilo in 1952 takes 56 seconds—although in this version there is a significant amount of the tempo variation for which Troilo became notorious so some bits are faster, some bits are slower. Vargas with D’Amario in 1957 is the slowest at 53 seconds, and he is the only one that actually matches Carbó – but then, Ángel Vargas was a soloist who went out on his own and some comparability may be expected. So in this case comparing Carbó to Canaro’s version indicates a 35% increase in time taken—although this needs to be understood in the context of a piece that is much faster than most tangos – closer to 70 than 60bpm.

In short, overall the tempo of Carbó’s singing is much slower than earlier productions, with the length typically in the range 15-25% longer. Put another way, whereas a typical tango speed is around 60 beats per minute, these are ranging below 50 beats per minute. This is one of the reasons why recordings by modern operatic singers are really not for dancing—they are just too slow. 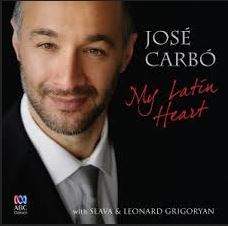 This week I am revisiting My Latin Heart, but this time from the perspective of the CD from José Carbó and the Grigoryan brothers.

Some music from Sassone and Castillo, and the final part of the interview with Nadia Piave round out another cantor-oriented edition.

The image is of the CD My Latin Heart,  from José Carbó and the Grigoryan brothers in 2012.

It’s cantores all the way down this week… 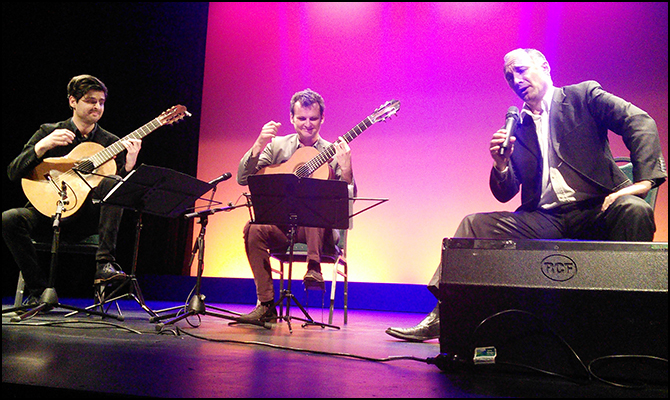 Join me in Healesville, Victoria, for a concert of tango and guitars with baritone José Carbó and the Grigoryan brothers,  take a further look at Nadia Piave‘s perspective as a tango soprano in the third of a four-part interview, and explore the songs of Cordero. That’s the tango hour this week, Sunday evening from 7:00pm:

Join me in tracing the influence of Francisco Fiorentini on tango singing, and further explore the connections of tango singing with Italian and French singing traditions with Nadia Piave.

This week the focus is on the dancable Enrique Rodriguez, we check out the new Orquesta, La Luna, and interview Sydney tango singer Nadia Piave.